Sheriff Harder made the announcement before a crowd of approximately 100 supporters at Brothers Two Restaurant in Endwell. 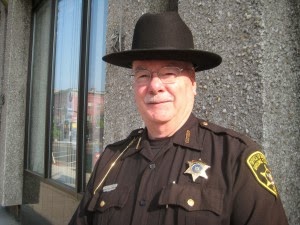 “The Sheriff’s Office has come a long way since I took office in January 1999,” said Sheriff Harder. “When I took over, we didn’t even have computers in the office. Now we have mobile computers in every vehicle and are developing a new mobile app to give the public important information right in the palms of their hands on their smartphones.”

Aside from discussing technology improvements that help make the Sheriff’s Office work smarter and more efficiently, Sheriff Harder shared information about keeping the public safe during the floods of 2006 and 2011, increasing standards at the Sheriff’s Office, and investigating and solving challenging and sometimes disturbing crimes.

“I get out of bed every morning because I want to help people. And I’m not done helping yet,” Harder added. “I look forward to earning your vote again this fall so we can keep doing our best to make Broome County the safest place it can be.”

Following a decades-long decorated career in law enforcement, Harder was first elected Sheriff in 1998, and subsequently won re-election in 2002, 2006 and 2010.

He lives in Conklin with his wife, Linda, and will run again as a Republican this year.

Binghamton, NY – Republican Rich David took the oath and was sworn in as the Mayor of Binghamton. 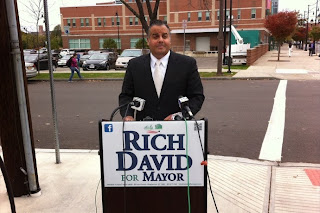 “I’m very excited and I’m very eager. I mean this is really is kind of the last but most important part of the campaign process being sworn in. Tomorrow I can actually go to work and we can start making decisions and moving in a new direction,” David said.

Getting right to work, David says he is ready to fulfill his campaign promises and make Binghamton a safer place. In light of the recent increase in criminal activity, “This city will not be a great city until we are a safe city,” David said, “I’m very concerned by the recent reductions and I’m going to gradually move forward through the ranks and have a full court press on crime.”

David is currently collecting applications for appointed positions. In the next couple months, David hopes to have all appointments filled. To apply visit Rich David’s website.
Posted by Admin at 5:50 AM No comments: