Thank you to the voters of Broome County for again overwhelmingly electing Republicans to office in Federal, State and Local elections this week.

In all, there were elections for 113 offices to represent areas of Broome County on Tuesday. Republicans prevailed in 90 of them while Democrats won 22 (a Republican is also leading in one that’s still to be decided by Absentee Ballots). Wow! I don’t think there’s a sports teams out there that wouldn’t be pleased with an .800 winning percentage.

In Congress, Richard Hanna and Chris Gibson were re-elected. At the State Level, Senator Tom Libous, and Assemblymen Cliff Crouch and Chris Friend were re-elected. Countywide, Sheriff Dave Harder was elected by a massive 19-point margin, while Republicans Rick Miller and Mark Young swept the two Family Court Judge openings overwhelmingly. The Republican Majority on the County Legislature grew from 10-5 to 12-3 with two incumbent Democrats getting beat. We swept contested races in the Towns of Union, Chenango and Binghamton, and won dozens more in other areas.

I’m proud to say that we’ve changed the political landscape dramatically in the last four years. We’ve flipped seats from Democrat to Republican for Congress, County Executive, the County Legislative Majority, Binghamton Mayor, Johnson City Mayor, and more. There are now 14 Republican Town Supervisors out of 16 total in the County, and we hold a Majority on six of seven Village Boards.

This run of Republican success is not an accident. The policies and ideas of the Republican Party are working because they are your ideas. Our candidates are successful because they are your friends and neighbors. And we’re getting Broome County headed back on the path to prosperity as a result of hard work, a can-do attitude and a commitment to the future of our region.

Our local Republican Party has also put enormous effort into recruiting the best possible candidates, and executing a skillful campaign operation. Heading into 2015 and 2016, we’ll keep up our relentless pace, working hard to win every seat that comes up for election. We consider every seat “in play”, so if you’re interested in getting involved or running for office, please contact us at 723-8201 or bijoy@broomerepublicans.com.

But it’s not all about politics. While campaigns are an integral part of our democracy, campaign season is over and now the hard work of governing begins.

We look forward to the results that the many Republicans who were elected on Tuesday will deliver for our community.

Since our founding at the turn of the 20th century, the Broome County Republican Committee has cultivated the hopes of Broome residents and produced the ideas that have lit our nation, from Binghamton to Albany, to Washington DC and coast to coast. We are truly the Party of the people; we stand with you in good times, and are behind you in difficult times.

Our local GOP remains the Party of smaller government and conservatism. But we are also a Party of ideas, leaders and inclusion. We continually evolve and this is evident by the diverse backgrounds of our leaders throughout the County. Our different upbringings and experiences make us even stronger. We don’t always agree on every issue, but good and honest debate makes us stronger, and because of that Broome County is stronger.

If you haven’t already done so, I encourage you to learn more and consider joining us. You can find out more at www.BroomeRepublicans.com or visit us on Facebook at “Broome GOP”, and together we will continue to light the way for our next generation. 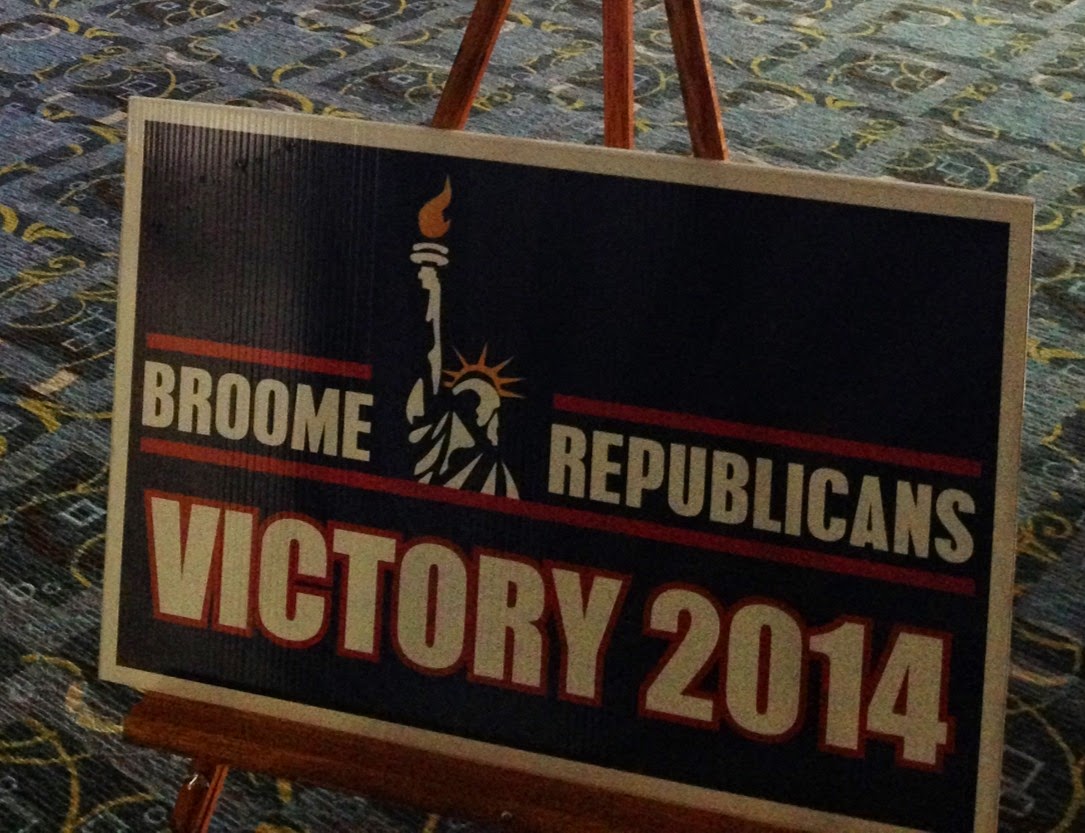 “Tonight Broome County voters again made a clear choice. They overwhelmingly elected Republicans to offices large and small all over the County. Sheriff Harder won by a huge margin. We swept the two open Family Court Judge races. We extended our super-majority on the County Legislature. We held the Supervisor and Town Board seats in the Town of Union. And it appears that we won the open Vestal Town Board seat, though that will likely go to an absentee ballot count.

“In all, Republicans won 80% if the 115 seats that were up for election within Broome County this year. That’s staggering when you think about it – and it’s a reflection of the superior strategy and ground game that we’ve developed and implemented.”

“In the last few years, we’ve flipped seats from Democrat to Republican for Congress, County Executive, the Majority on the County Legislature, Binghamton Mayor, Johnson City Mayor, and more. Heading into 2015 and 2016, we’ll keep up our relentless pace, working hard to win every seat that comes up for election.”
Posted by Admin at 7:33 AM No comments: