BINGHAMTON, NY.   Debra Hogan recently announced her candidacy for the Broome County Legislature. She will be running in Legislative District #14, which covers the east side, the north side, center city and a portion of the first ward.

Debra Hogan detailed some of her priorities. “Four of the most important things I want to work hard for are improving public safety, beautifying our neighborhoods, increasing the cooperation between the City and the County and putting a renewed emphasis on constituent services. I know that there will be other issues that come forward over the coming weeks and months. But these four issues are crucial to Legislative District #14. I know that as someone who has been actively involved in the community for many years.”

Steve Snitchler, chair of the City of Binghamton Republican Committee, added, “Debra would be a great partner with for City officials like Mayor Rich David and the Councilmembers to address problems facing our neighborhoods such as crime. We’re all in this together and it’s only through working together than we can succeed.” 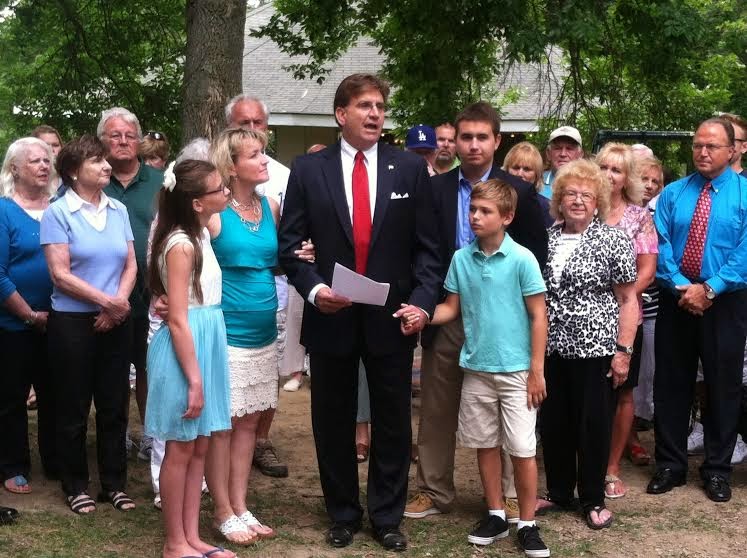 “Family Court serves some of our most vulnerable citizens going through some of the toughest times in their lives,” he added. “We need a Family Court Judge who will uphold the highest level of honesty, compassion, and integrity to help produce the best possible outcomes for the individuals and families who come before the Court.”

A lifelong resident of Broome County, Judge Miller is currently the elected Town Justice for the Town of Union (the most populous municipality in Broome County) and elected Village Justice for the Village of Johnson City. He also operates his own private law office in Endwell.

As a dedicated community volunteer, Judge Miller has served on the Board of Directors for the Roberson Museum and American Civic Association.

He has also dedicated countless hours to helping our community’s children as a coach for Johnson City Little League, Pee-Wee Football, AAU and CYO Basketball, and many other sports programs.

“My dad taught me that giving back to your community wasn’t something you thought twice about. You give back because it’s the right thing to do,” said Judge Miller. “He and my mother taught us to be caring, compassionate, and tough when necessary – all traits that are needed in our next Family Court Judge.”

He lives in Johnson City with his wife, Dr. Julie Miller, and their four children, Ricky, Lauren, Julianna and Joseph.

Two Family Court judgeships will be on the ballot in Broome County in the Fall 2014 election. Judge Miller and Mark Young are running on the Republican, Conservative and Independence lines while Peter Charnetsky and Daniel D. Reynolds are running on the Democrat and Working Families lines. The top two vote-getters out of the four candidates will take office on January 1, 2015.

"We do not feel the function of the taxpayer-funded position of City Clerk and Deputy Clerk is to gather political intelligence to undercut the opposing party in power," said Council members Mihalko, Papastrat and Matzo. "We should be working with the new Mayor and his team on behalf of the residents, not trading public positions for political gain."

"What this e-mail reveals is a peek behind the curtain as to how the Council President and some members of Council's leadership view the City Clerk's Office," said the Council members. "What we're seeing here is not in the best interest of the taxpayers. We applaud one recipient of this e-mail for recognizing the job requirements were unethical and wrong, and exposing these activities to the public."

"We were elected to work on behalf of all City residents," said the Council Members. "We support the new administration's efforts to pave more roads, add police, attack blight, better manage City finances and address quality of life issues in our neighborhoods. We've had enough of the obstruction that's followed the change in administration. After reviewing this e-mail, what we thought was just resentment from losing the race for Mayor, is actually a more serious and organized effort to undercut Mayor David, City employees and Council Republicans."

"We feel this incident has compromised Councilwoman Rennia's ability to effectively represent this body as President," said the Council Members. "Not only has she failed to renounce this scheme, but she is identified in the e-mail as its architect — requesting it be sent and personally collecting resumes for review. At the next City Council meeting, we will call for a vote to select a new Council President. We urge our Democratic colleagues to support a change, and encourage them to think long and hard about the message they want to send to their constituents."

The author of the e-mail is Marty Doorey, Chair of the City of Binghamton Democratic Committee. Doorey is also Chairman of the Community Development Advisory Committee (CDAC), an official City committee responsible for coordinating citizen input regarding the $1.9 million Community Development Block Grant program and submitting recommendations to the Department of Planning Housing and Community Development and City Council. Doorey represents the 7th Council District on the committee — Councilman Bill Berg's district. CDAC members receive a $500 annual stipend.

"In light of Mr. Doorey's participation in these unethical political activities involving taxpayer-funded positions, we are calling for his resignation from the CDAC, effective immediately," said the Council Members.

"Candidates should be selected based on experience and qualifications, not political affiliation or years of service to the party. We encourage the Council's Democratic majority to implement a transparent hiring process. The positions should be publicly advertised and any member of the public should have an opportunity to apply."

The source e-mail was supplied anonymously to the Republican Council members. Its legitimacy was then confirmed by a Democratic member of City Council.