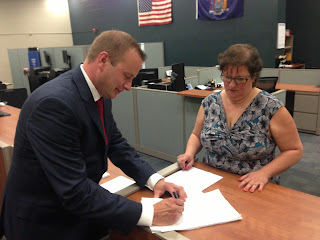 “It’s been an honor to meet hundreds of Broome County residents over the last several weeks, from Binghamton to Barker, West Endicott to Windsor, and everywhere in between. Our community is tired of the status quo and ready for real leadership and a plan to make our community safer,” said Cornwell.

“I’m thankful to my dedicated team of volunteers who worked so hard to collect signatures and help spread our message,” he added. Broome County residents expect and deserve results that matter, but the current 30-year career politician in the D.A.’s Office, lifetime politician Gerald Mollen, has failed us.”

Cornwell says the heroin epidemic, drug crimes, gangs, violence and deteriorating neighborhoods are among the issues on Broome County resident’s minds this year.

New York State Election Law requires candidates collect petition signatures within their district in order to appear on the ballot.

Cornwell currently owns and operates a private law firm, The Cornwell Law Office; he worked as a Prosecutor in the D.A’s Office from 2007-2009.