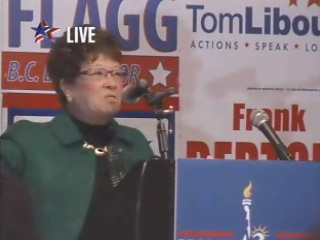 While the man at the top of the GOP ticket may have walked away without a win, it was otherwise a night full of victory speeches for our Broome GOP candidates.

Sure to be at the top of everyone's mind, Debbie Preston's vivacious victory speech gave the crowd quite a thrill.  After a long campaign against challenger Tarik Abdelazim, who insisted on setting a negative tone from the start, the humor-filled speech was a welcome relief.

Senator Libous was on hand too to celebrate his victory against second-time challenger John Orzel.  Keeping true to his wife, Fran's, "break a leg" request, he made his acceptance speech crutch-bound after a slight accident days earlier.

The Broome Legislature's GOP Majority strengthened their previous gains with several wins across the board, notably with Scott Baker's upset over incumbent Steve Herz.

Congratulations are also in order for Rep. Richard Hanna who bested longtime Hinchey affiliate Dan Lamb as well as Rose Sotak, who held on to the Town of Union Supervisor's office against five-time office holder Jack Cheevers.
Posted by Admin at 3:21 PM