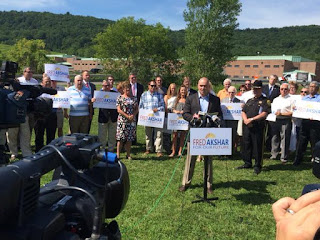 Fred Akshar currently serves as Undersheriff for Broome County and has served the community for 15 years in law enforcement.

“I’ve committed my life to making our community the best it could be,” said Akshar. “The families in our community deserve a strong, energetic voice. I plan to bring the same passion and dedication from my service in law enforcement to the State Senate.”

Akshar started his career as a Road Patrol Officer for the Broome County Sheriff’s Office. He worked his way through the ranks of the Detective Division, eventually spending 5 years in the Undercover Unit. He returned to the Highway Patrol as a Captain where he commanded the Law Enforcement Division. He was appointed to Undersheriff in June. Akshar is also a graduate of the 247th Session of the FBI's National Academy.

"Our local Republican leaders spent many long hours considering dozens of candidates," said Broome County Republican Chairman Bijoy Datta. "It was important to have a thoughtful, deliberative and local process to ensure we delivered the best person to represent our community. We couldn't have found anyone better than Fred Akshar to produce new leadership and fresh ideas in Albany."

“Fred’s not a career politician, but he is a career public servant,” said Broome County Executive Debbie Preston. “He’s a fresh face with energy and passion for the job. He’ll be a great representative for our community and our way of life.”

“In law enforcement, you trust your partners with your life. They trust you with theirs,” said Broome County Sheriff Dave Harder. “ Our community needs a partner we can trust to be there for us. Fred will be there.”

Raised in Afton, NY, Akshar has lived in Colesville for the past 10 years.