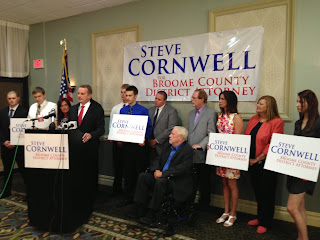 (BINGHAMTON, NY) – Local attorney, youth coach and family advocate Steve Cornwell today announced his campaign for Broome County District Attorney. Cornwell made the announcement in front of an enthusiastic crowd of supporters at The Holiday Inn in Downtown Binghamton.

“Broome County needs big changes in the District Attorney’s Office. We need new vision, new ideas and new leadership,” said Cornwell. “I will be a D.A. who will be an advocate for our children and families, and who will fight to keep our community safe against dangerous criminals.”

For the past ten years, Cornwell has practiced Criminal and Family Law at his Binghamton Law firm, the Cornwell Law Office. He also worked as a prosecutor in the District Attorney’s Office from 2007-2009.

As Broome County’s new District Attorney, Cornwell will focus on:
· Fighting and winning the war on drugs, including our area’s rising heroin epidemic;
· Making Broome County one of the safest counties in New York and a more attractive place to live, work and invest; and
· Reorganizing the D.A.’s Office to become financially efficient and more effective in the courtroom.

“Are you safer than you were four years ago? How about eight years ago? Or even 28 years ago when Gerald Mollen first took office?” added Cornwell. “We need a plan to fight crime in 2015 and beyond, not a plan from 1987 when Mollen was elected. I have the solutions for today; he is yesterday. You can't solve 21st century problems, with a 20th century politician and no plan.”

Recently retired Broome County Sheriff’s Detective Sergeant Jason Ellis introduced Cornwell. “Our local law enforcement agencies needs a partner who won’t make plea bargains for dangerous criminals standard operating procedure,” said Ellis. “Police Officers are doing their jobs, risking their lives, and taking the bad guys off the streets. We need a D.A. who will fight just as hard. Steve Cornwell has the leadership, integrity and passion to get the job done.”

“During my career I’ve represented many Broome County residents so I have firsthand knowledge of the serious issues plaguing our community,” added Cornwell. “They’re afraid to leave their homes at night, families are scaredto let their children play outside, our seniors are being scammed and taken advantage of. The Sheriff’s Office and Police Departments are working hard to fight it, but the business-as-usual mentality in the D.A.’s Office is devastating our community and hurting our most vulnerable residents.”

Cornwell enjoys the outdoors, hunting, fishing and sports. For over a decade he has coached youth baseball inBinghamton, Johnson City and Endicott. He lives in Endicott with his wife Michelle; they have seven children.