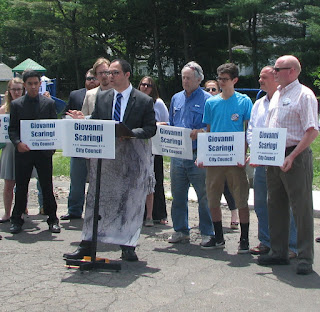 (BINGHAMTON, NY) -- Giovanni Scaringi announced his candidacy for Binghamton City Council on Wednesday, June 24, 2015, at 12:00PM in front of the Old First Ward Pool on Seymour Avenue, Binghamton, NY 13905. He will be running in District #1, which covers the entire First Ward of the City of Binghamton and Ely Park.

Local officials, neighbors, friends, and supporters were in attendance. Giovanni focused on the necessity of dealing with crime, depleting infrastructure, and jobs.

Giovanni is an Assistant Professor of Economics in the Department of History, Philosophy, and Social Sciences at SUNY Broome.